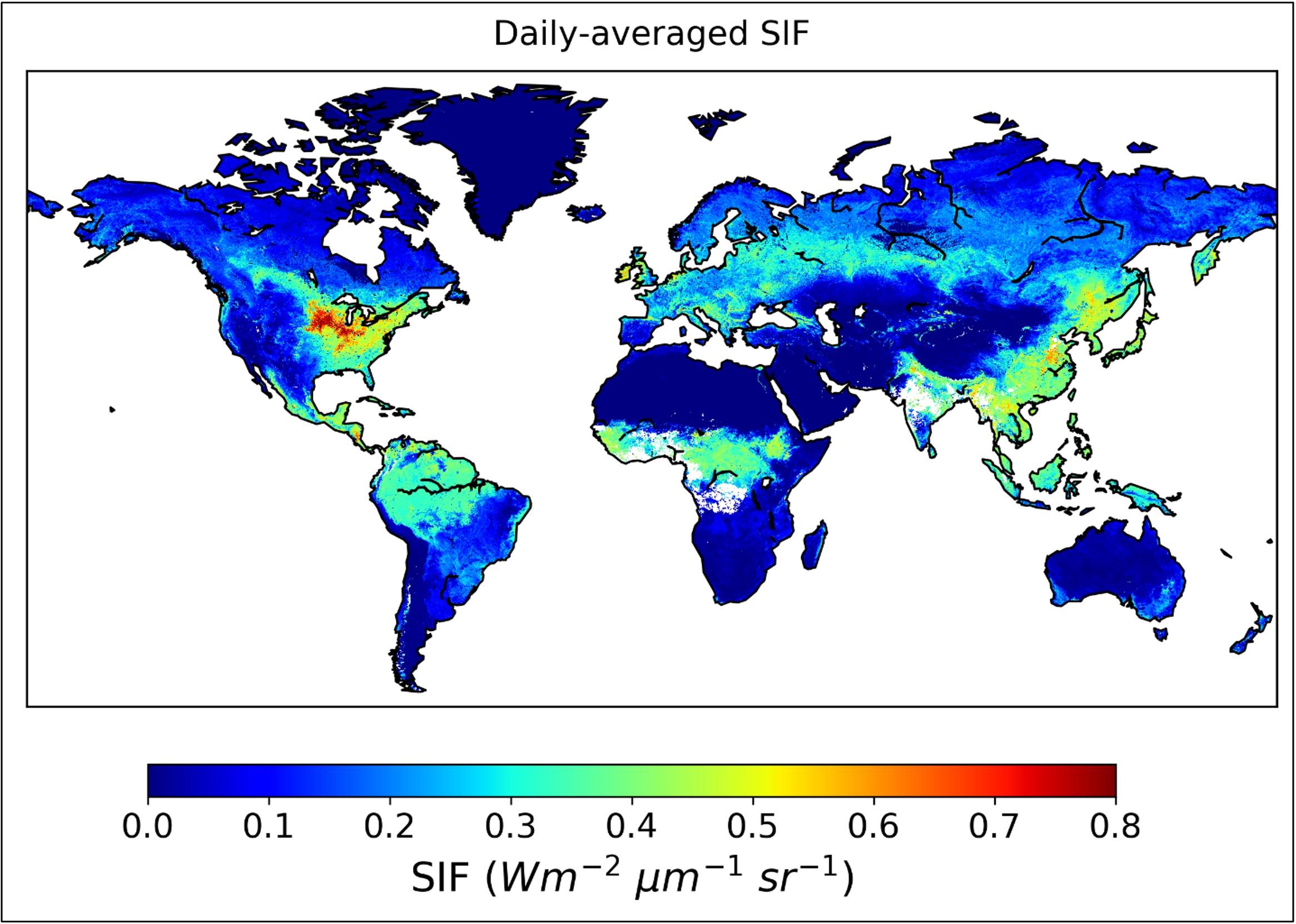 Predicted spatially contiguous SIF in the first half of August 2015. The highest SIF values during this time period were observed in agricultural sectors in the Northern Hemisphere. Source: Data file sif_ann_201508a.nc

This dataset provides spatially-contiguous global mean daily solar-induced chlorophyll fluorescence (SIF) estimates at 0.05 degree (approximately 5 km at the equator) spatial and 16-day temporal resolution from September 2014 through July 2020. This product was derived from Orbiting Carbon Observatory-2 (OCO-2) SIF observations and produced by training an artificial neural network (ANN) on the native OCO-2 SIF observations and MODIS BRDF-corrected seven-band surface reflectance along OCO-2's orbits. The trained ANN model was then applied to predict mean daily SIF (mW/m2/nm/sr) in OCO-2's gap regions based on MODIS reflectance and landcover. This framework was stratified by biomes and 16-day time steps. This dataset's high resolution and global contiguous coverage will greatly enhance the synergy between satellite SIF and photosynthesis measured on the ground at consistent spatial scales. Potential applications of this dataset include advancing dynamic drought monitoring and mitigation, informing agricultural planning and yield estimation, and providing a benchmark for upcoming satellite missions with SIF capabilities at higher spatial resolutions.

This version extends the data period through July 2020. This is an updated version, produced with OCO-2 SIF retrieval version 10.  Processing and modeling of Versions 1 and 2 were the same.

The NASA MEaSUREs program is a commitment to expanding the understanding of the Earth system using consistent records. NASA has begun to deploy new types of sensors to provide three-dimensional profiles of Earth's atmosphere and surface. Emphasis is placed into linking together multiple satellites into a constellation, developing the means of utilizing a multitude of data sources to form coherent time series, and facilitating the use of extensive data in the development of comprehensive Earth system models.

Additional data from MEaSUREs and other relevant links can be found on the ORNL DAAC's MEaSUREs Project Page.