ABoVE: Projection of Permafrost Thaw 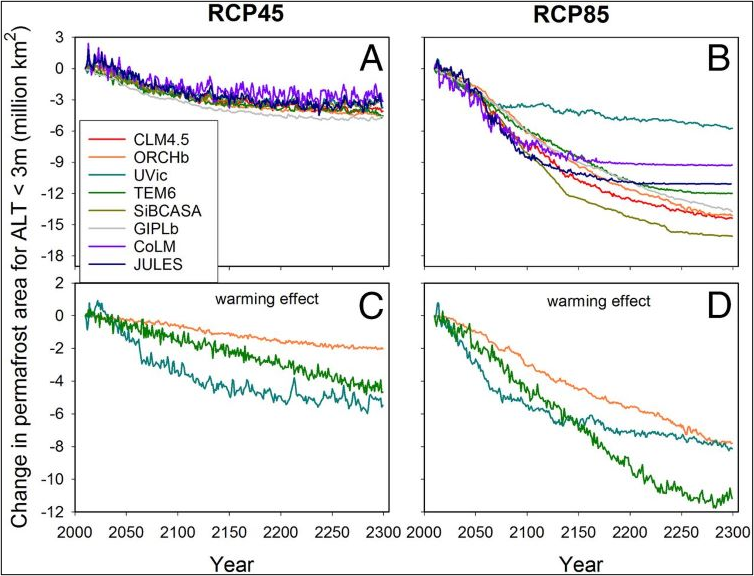 This dataset consists of an ensemble of model projections from 1901 to 2299 for the northern hemisphere permafrost domain. The model projections include monthly average values for a common set of diagnostic outputs at a spatial resolution of 0.5 x 0.5 degrees latitude and longitude. The model simulations resulted from a synthesis effort organized by the Permafrost Carbon Network to evaluate the impacts of climate change on the carbon cycle in permafrost regions in the high northern latitudes. The model teams used different historical input weather data, but most used driver data developed by the Climate Research Unit - National Centers for Environmental Prediction (CRUNCEP) as modified for the Multiscale Terrestrial Model Intercomparison Project (MsTMIP). The teams scaled the driver data for the projections using output from global climate models from the fifth Coupled Model Intercomparison Project (CMIP5). The synthesis evaluated the terrestrial carbon cycle in the modern era and projected future emissions of carbon under two climate warming scenarios: Representative Concentration Pathways 4.5 and 8.5 (RCP45 and RCP85) from CMIP5. RCP45 represents emissions resulting in a global climate close to the target climate in the Paris Accord. RCP85 represents unconstrained greenhouse gas emissions.