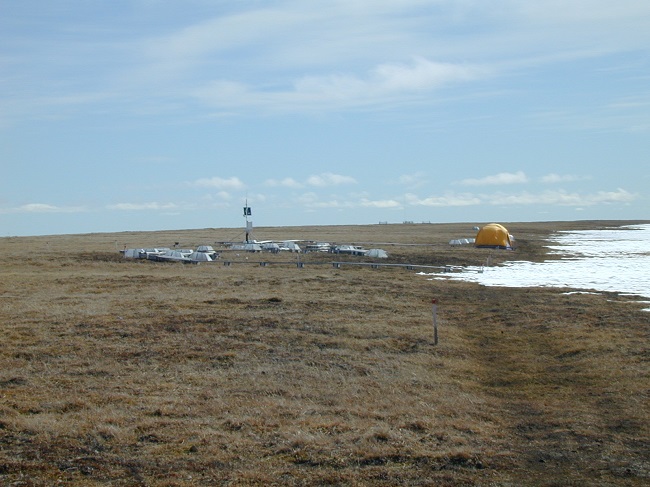 This dataset provides measurements at tundra plots collected near Utqiagvik and Atqasuk, AK, including visible-near infrared spectral reflectance, chamber gas exchange measurements of CO2, pulse amplitude modulated (PAM) fluorometry, chlorophyll pigment contents, along with surface temperature, permafrost active layer depth, and soil temperature at 5 cm, through the growing seasons of 2001 and 2002. At all plots, spectral reflectance was measured using a portable spectrometer configured with a straight fiber optic foreoptic, surface temperatures were measured using a handheld Everest Infrared Thermometer, and thaw depth (or active layer depth) was measured using a metal rod graduated in centimeter intervals. At small plots (~15 cm) at Utqiagvik (referred to as Patch plots) chambers were constructed that enclosed an individual patch to determine photosynthetic rate and estimate respiration rate (made by covering the chamber in a dark cloth). Efficiency using PAM fluorometer, ambient yield estimations, and rapid light curve measurements were taken. Chlorophyll concentration was measured with a portable spectrometer configured as a spectrophotometer. At larger plots (approximately 1 m2) which were part of the International Tundra EXperiment (ITEX plots) at Utqiagvik (referred to as Barrow) and Atqasuk, a sub-sample of five control and five warmed plots at each site were fitted with 0.45 m diameter polyvinyl chloride collars for chamber flux measurements. To determine the total fraction of absorbed photosynthetically active radiation (fAPAR), a series of photosynthetically active radiation (PAR) measurements were made using a custom-made light bar consisting of a linear array of GaAsP sensors mounted within an aluminum U-bar under a white plastic diffuser. In addition, a visual estimate was made of the fraction of standing dead vegetation based on percent cover. The data are provided in comma-separated values (*.csv) format. In addition, photographs of plots and instruments are provided.