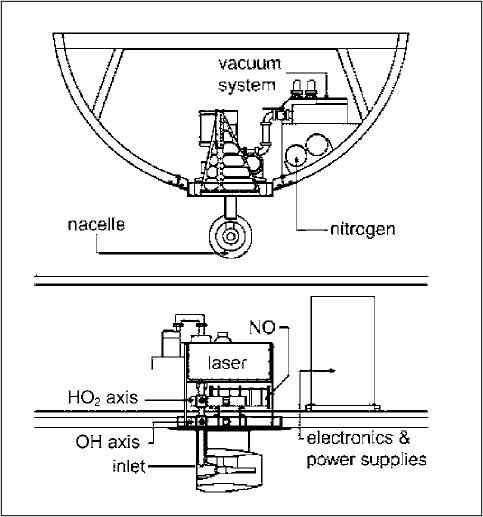 A schematic of ATHOS looking from in front of the electronics rack (top) and from the DC-8 aircraft's port side (bottom).

This dataset provides the mixing ratios of hydrogen oxides measured by the Airborne Tropospheric Hydrogen Oxides Sensor (ATHOS) during the ATom 1-4 campaigns. ATHOS uses laser-induced fluorescence (LIF) to measure hydroxide (OH) and hydroperoxyl (HO2) simultaneously. The measurements include OH and HO2 mixing ratios and the OH interference determined by chemical removal of OH. The reactivity of OH is measured by the OH Reactivity (OHR) instrument using the discharge flow method and is integrated into the ATHOS electronics. These data provide insights into the oxidative state of the global atmosphere. These data are useful for testing the oxidation chemistry in models and other analytical methods being developed to deduce the atmosphere's oxidative state.

This is Version 2 of this dataset where improved calibration methods resulted in updated data values in all four ATom campaigns within the Mission.