Is the snow melting earlier? 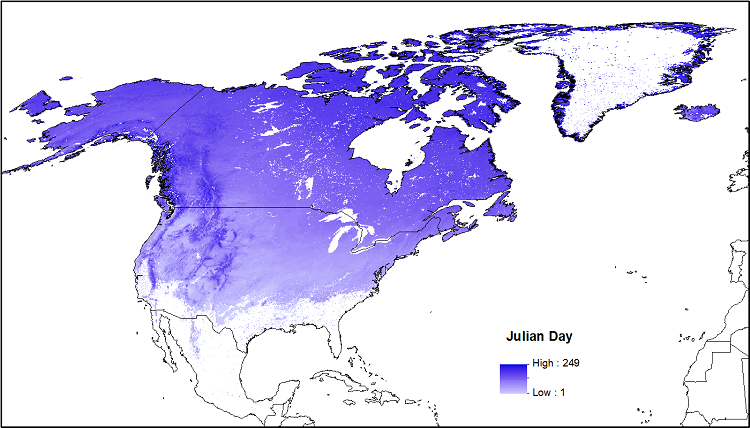 Mean snowmelt Day of Year (DOY) for the years 2001-2015 for North America. The DOY values for snowmelt timing were identified by observing the transition from snow-cover to no-snow for individual MODIS pixels throughout the annual melt period.

This data set provides snowmelt timing maps (STMs), cloud interference maps, and a map with the count of calculated snowmelt timing values for North America. The STMs are based on the Moderate Resolution Imaging Spectroradiometer (MODIS) standard 8-day composite snow-cover product MOD10A2 for the period 2001-01-01 to 2015-09-06. The STMs were created by conducting a time-series analysis of the MOD10A2 snow maps to identify the DOY of snowmelt on a per-pixel basis. Snowmelt timing (no-snow) was defined as a snow-free reading following two consecutive snow-present readings for a given 500-m pixel. The count of STM values is also reported, which represents the number of years on record in the STMs from 2001-2015.