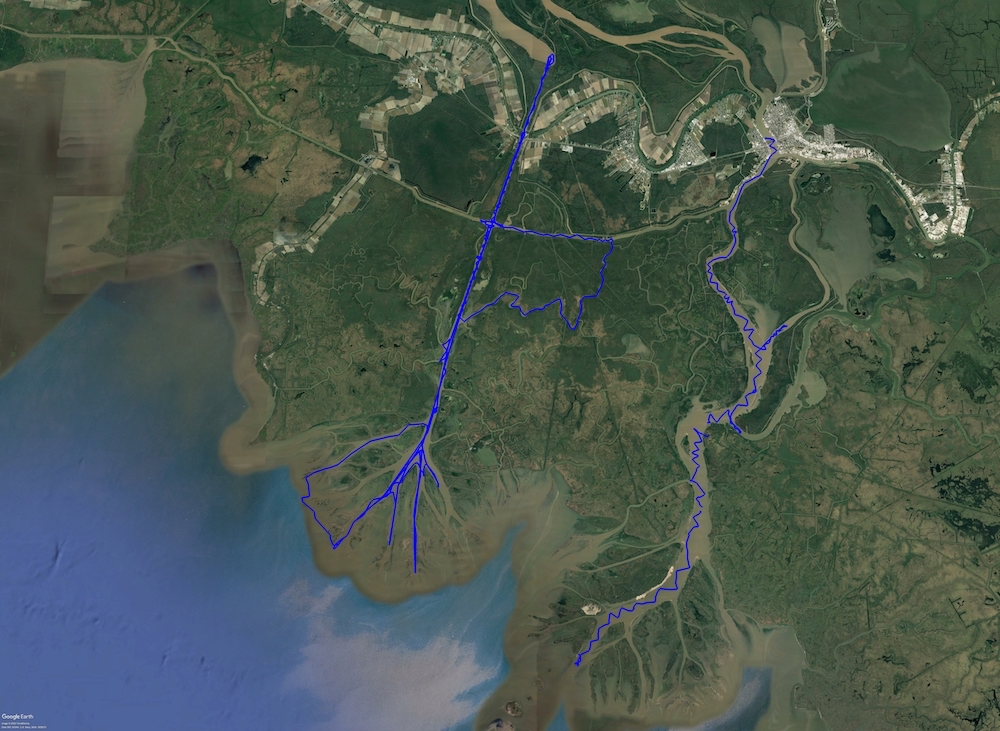 In blue, the extent of the Fall 2016 channel bathymetry survey in the main channels of the Atchafalaya and Wax Lake Deltas.

This dataset provides water depths and water surface elevations collected during bathymetric surveys of the main channel of the Wax Lake Delta within the Mississippi River Delta (MRD) floodplain of coastal Louisiana, USA. The measurements were made during the Pre-Delta-X Campaign in Fall 2016. The in situ continuous (1 Hz) surveys of channel bathymetry were conducted using a SonarMite Hydrolite Single Beam Echo Sounder mounted on the side of the research boat. The sounder was located directly beneath the Septentrio global navigation satellite system (GNSS) antenna, about 30 cm below the water surface. The sounder depth observations were integrated with the GNSS location and elevation data into one data file per day for October 16-20. These bathymetry measurements were used to generate a merged digital elevation model (DEM) through interpolation with ancillary DEMs to expand the existing wetland DEM to include channels.

The Delta-X mission is a NASA Earth Venture Suborbital-3 mission to study the Mississippi River Delta in the United States, which is growing and sinking in different areas. River deltas and their wetlands are drowning as a result of sea level rise and reduced sediment inputs. The Delta-X mission will determine which parts will survive and continue to grow, and which parts will be lost. Delta-X begins with airborne and in situ data acquisition and carries through data analysis, model integration, and validation to predict the extent and spatial patterns of future deltaic land loss or gain.

Other data from this mission can be found at the ORNL DAAC's Delta-X project page.