Wolf Denning Phenology and Reproduction in ABoVE Core Domain, 2000-2017 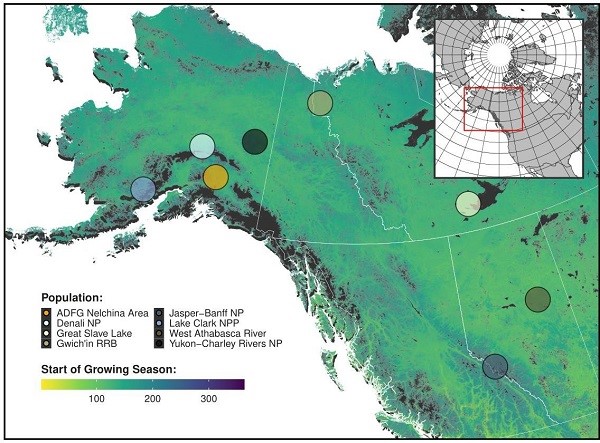 Spatial distribution of eight wolf study populations used in an assessment (from 2000-2017) of denning phenology in response to climate signals. The base map shows the day of the year representing the NDVI-derived start of the growing season in 2010.

ABoVE: Wolf Denning Phenology and Reproductive Success, Alaska and Canada, 2000-2017

This dataset provides annual gray wolf (Canis lupus) denning spatial information and timing, associated climatic and phenologic metrics, and reproductive success in wolf populations across areas of western Canada and Alaska over an eighteen year time period.  In the study, wolves were captured from eight populations and released with Global Positioning System (GPS) collars. Data from 388 wolves were used to estimate den initiation dates and reproductive success in the eight populations. Each population was monitored from 1 to 12 years between 2000 and 2017.

To evaluate the effect of climate factors on reproductive phenology, aggregated seasonal climate metrics for temperature, precipitation, and snow water equivalent based on three biological seasons for seasonal wolf home ranges were produced. Normalized Difference Vegetation Index (NDVI) time-series data were used to estimate phenological metrics such as the start of the growing season (SOS), length of the growing season (LOS), and time-integrated NDVI (tiNDVI), and were summarized for the populations' home range.