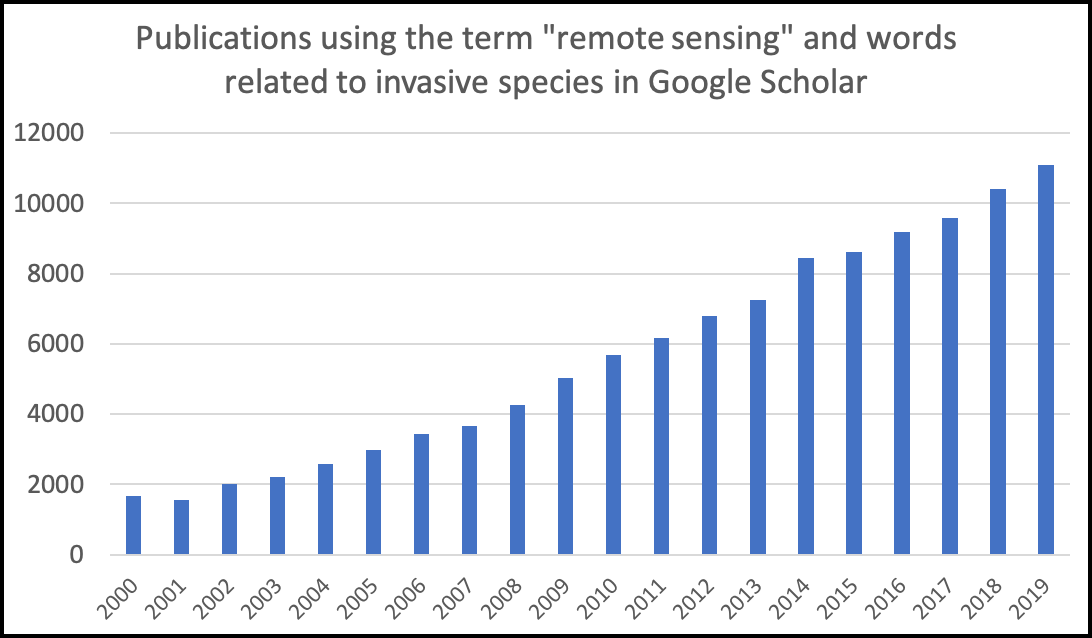 Searching for the term remote sensing and words related to invasive species (invasive, nonnative, exotic, or nonindigenous) in Google Scholar reveals an increasing number of publications each year using these terms.

Invasive species cost the U.S. economy about $120 billion a year, and "the current annual environmental, economic, and health-related costs of invasive species exceed those of all other natural disasters combined" according to the U.S. Geological Survey (USGS). Because invasives have such a large impact on our economy and environment, many researchers at universities and federal agencies are developing strategies to monitor and control them in order to minimize their damage. Using remote sensing in invasive species research is becoming more prevalent every year, as new data becomes available and researchers are finding different ways to incorporate Earth observations into their work.

Vegetation indices such as NDVI are often used in invasive species studies. They can be used to directly detect invasives or can also be used to monitor resource degradation from overuse as food or shelter. For example, a 2013 study that used NDVI data from the MODIS subsetting tool from NASA’s Oak Ridge National Laboratory Distributed Active Archive Center (ORNL DAAC) found that introduced spotted deer (Axis axis) and elephants (Elephas maximus) consumed so much vegetation on the Andaman islands, a chain of islands off the coast of India, that there was a significant reduction in NDVI where the animals were present.